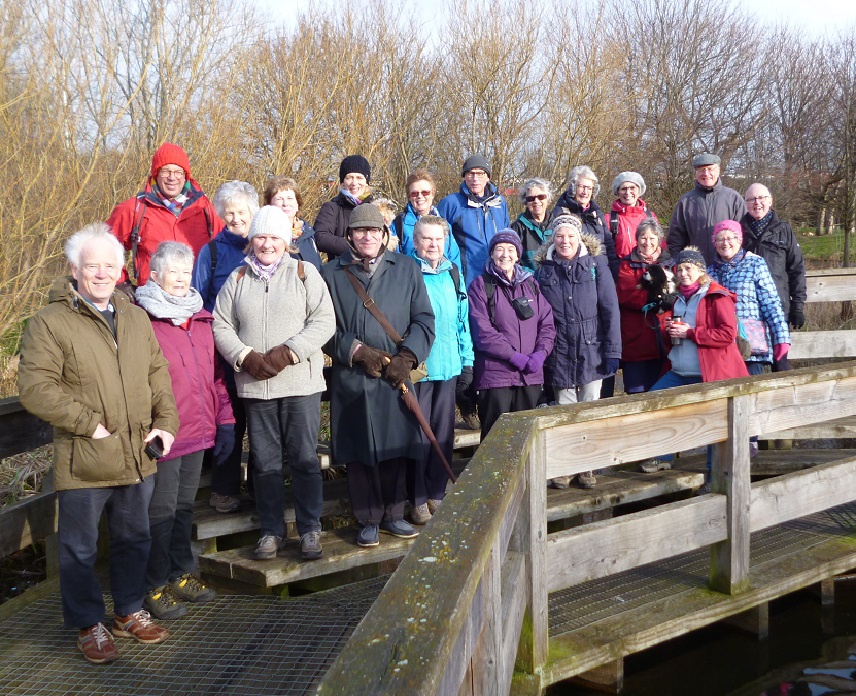 Wardie Walkers is an informal group who go out once a month on a Wednesday. We have walks of different lengths, with a variety of leaders, sometimes with a visit such as Stirling Castle. We often end up at a teashop after our walks. A great chance to get to know people. No need to book, just come. All walks start at the Clark Road cycle entrance at 10am. Transport by walking, car share, bus or train.

Eighteen walkers and Maisie the dog met up at Clark Road to catch a bus to Princes Street where we boarded a tram for Haymarket Station. Adam Gillingham the walk leader informed us of the history of the station and a few other interesting facts along the route.

Following the tram lines we set off to join up with the railway footpath which runs parallel to the railway line. Joining the footpath at Roseburn we crossed the Water of Leith and wandered down past Ravelston and Craigleith whilst the Walkers tried to work out where they were.

At the back of Sainsbury’s at the Craigleith Shopping Centre, we stopped to view the exposed sedimentary rock from the Craigleith Quarry. This had supplied a lot of the stone for the New Town.

Returning to the footpath, we continued on to Davidsons Mains where most of the Walkers stopped for refreshments at the Olde Inn.

We set off from Clark Road up to Princes Street where we caught the bus for Haddington. Our guide, Richard, took us along the Haddington High Street and then on to the Nungate Bridge. We crossed the River Tyne, enjoying the sunshine and tranquility as we walked. Lunch was had beside the river. Further on some of our group ventured into Hailes Castle and the rest continued on towards East Linton and the Votadini café. The group from the castle then met up at the café for a welcome cuppa.

Our walking group set off in cars to travel to Vogrie. Rosemary then led us past the old walled garden where we admired the last of the snowdrops and journeyed on towards the house. Following the river we eventually arrived at Ford village. From there we walked on to Dewarton and thence back into the Vogrie estate and went to the cafe where we enjoyed a bite of lunch, a drink and chat.

Our mode of transport for this outing was the train from Waverley to Stirling. Walking uphill to the castle we passed by interesting buildings. Once inside the castle, William related some historical facts, particularly about the caponnaire (the henhouse) which shielded the soldiers from enemy fire. The views from the castle gardens were excellent and the mountains could be seen in the distance. The Stirling heads were of special interest and well worth a visit. We spent a beautiful sunny day exploring the grounds. We then headed back downhill to catch the train for Edinburgh.

15 walkers turned out for our guided walk led by Ron Dingwall starting from John Knox’s House. We did the top section in 2018.

We stopped at the Scottish Storytelling Centre to look up at the bell which was once atop the Moray Knox Church which used to occupy the site. Across the road is the façade of the long closed New Palace Cinema. At ‘the World’s End’ we glanced down at the brass setts in the road which marked the Netherbow Port. This was once the main entrance to the city.

Further on Ron told us some interesting facts about some the names of the closes.

At the Canongate Church we saw the statue to Robert Fergusson, a poet (who died aged 24) admired by Burns.

We ventured into Dunbars Close where there is a Knot Garden. A sheltered and tranquil spot.

Our last stop before passing by the Scottish Parliament Building was at White Horse Close where once stood an old coaching inn.

The walk concluded with lunch at the Queen’s Gallery Café.

The visit included the new library/museum, the Abbey, Refectory and Palace, Andrew Carnegie’s birthplace and museum and the Pittencrieff Glen and Park.

We set off by car for our walk in Perthshire. After a coffee stop at Birnam we headed just north of Dunkeld to Cally car park. From there we ventured on the quiet forestry trails through mature woodland overlooking the Tay where we had our picnic. After this we passed by a loch at Mill Dam before and picturesque Polney Loch before completing the circuit at the car park.

We went by the train on the Borders Rail Route train to Tweedbank. We walked to Melrose, mainly along the side of the River Tweed and had a picnic next to the river at Melrose. However, it did start to rain at this point. We visited the Priorwood Garden and Harmony Garden which are both National Trust properties and each very different to visit We also visited the Trimontium Roman Museum. From there most of us walked back to Tweedbank for the train back to Waverley.

Forth to Farne Way

The route we took was as below, for the most part on level ground, over tar roads, grass paths and farm tracks.

This walk started at Peggy’s mill road and headed out to the end of the runway at the airport. The walk is about 4 miles. It follows the river Almond in its various states. The walk starts off quite flat and then there are a series of steep steps which take us under the main road and back up on the other side to bring us out at the back entrance to the Cammo estate. We then followed the river along a narrow path which was a bit muddy and slightly overgrown. Richard wants more mud the next time. At the end of this path you get a great view of the planes landing as they skim over the main railway line. We followed the road along to Cammo and entered the estate to have our picnic in one of the old ruins. After a short wander around the estate we returned to Avon road along the other side of the river.

18 walkers travelled by car to the estate car park which is about half a mile west of Aberlady on the A198.

We had an interesting wander around the extensive grounds where there are many trees and open spaces, 18th-century ponds and associated small buildings plus the exterior of a mausoleum. There was also the imposing grandeur of the Robert Adam-designed Gosford House to be viewed from various aspects. The house was not open for viewing.

We also took the short walk from the estate to Aberlady and explored the church grounds and other places of interest. We called in at the Duck Inn for drinks and scones before heading back for the cars and home.

We started on our walk from George IV Bridge. We passed through Greyfriars Kirkyard and along the Grassmarket on our way to the Lochrin Basin at Fountainbridge to follow the Union Canal to Meggetland for lunch and then walked to Holy Corner for the bus home.

There are many points of interest on the route including the French-influenced roof of the Central Public Library visible from Candlemakers Row, which was the first library in Scotland to be funded by Andrew Carnegie. The Union Canal was built to connect Edinburgh to the Forth and Clyde Canal to allow coal and other goods to be brought into the city by boat. There are information boards about the history of the area close to the Lochrin Basin. We will point out points of interest as we go.

There were 23 walkers (and two dogs) on this walk.

We caught a 21 bus to take us to Portobello to start our walk. We headed along the promenade to Bath Street and up to the High Street.  From there we went to Rosefield Park and then Figgate Park. At the east end the burn is partly diverted into a large pond, which used to be a clay pit supplying clay to the potteries in Portobello. At the top end of the park we joined Duddingston Road to take us on to Duddingston. After being at the Sheep Heid Inn a few decided to go through Holyrood Park to catch a bus home from Newington but the weather turned very wet and windy for them on their way. The others headed for a nearby bus at Duddingston Crossroads.

There were 14 walkers on this walk.

We started by going along the walkways towards Tesco. We then passed through the tunnel to enter the George V Park. From there we went by Eyre Place, Dundas Street, Fettes Row, Circus Lane and India Place to join the Water of Leith Walkway at St Bernard’s Bridge.

After pausing at St Bernard’s Well we reached the Dean Village and took the Dean Path to cross the Water of Leith. Just beyond Well Court we re-crossed the river by a footbridge and again by the Belford Bridge. On the way from the Dean Village to the Dean Gallery there was a snow shower. We all had lunch at the Dean Gallery before most of us made our way back by Fettes and Inverleith in lovely sunshine.

There were 13 walkers (and two dogs) on this walk.

We travelled by bus to Inverkeithing to set off on our walk along the Fife Coastal Path.  It was showery at first but with the wind behind us however it soon turned dry. We had  gorgeous views over to the bridges and Edinburgh, passing attractive houses and some historic buildings e.g. Donibristle House, Dalgety Bay Sailing club, St Bridget’s Church where we had our picnic lunch in sunshine. We then past Aberdour Golf Club and carried on to the village High Street. We headed up to Aberdour Castle and the Norman Church of St Fillan’s and finished off at McTaggarts at Aberdour High Street for a coffee stop before heading home.