Lord of all ages, you are our beginning and our end.

Everlasting God, we place all of our days into your care.

We trust you and praise you for your faithfulness in the past and your continuing care today.

We place ourselves into your keeping to guard us and guide us today and out into the future.

We offer our lives in your service. Take us as we are and mould us into what you want us to become, through Jesus Christ our Lord.

Lord of history, to whom a thousand years are as a day; renew us through your Holy Spirit, that while we have life and breath, we may serve you with courage and hope, through the grace of your Son, our Saviour Jesus Christ.

Lord of mercy, we confess our failings and human frailty before you. Forgive our lack of love and sensitivity towards you and towards others. Forgive our walking by on the other side when we have been confronted by the needs of others. Forgive us and renew us in spirit and help us to walk the road of faith, the pilgrimage way, strengthen us in our weakness, open our eyes to see and respond to opportunities for service, through Jesus Christ our Lord.

On that day, when evening had come, he said to them, ‘Let us go across to the other side.’ And leaving the crowd behind, they took him with them in the boat, just as he was. Other boats were with him. A great gale arose, and the waves beat into the boat, so that the boat was already being swamped. But he was in the stern, asleep on the cushion; and they woke him up and said to him, ‘Teacher, do you not care that we are perishing?’ He woke up and rebuked the wind, and said to the sea, ‘Peace! Be still!’ Then the wind ceased, and there was a dead calm. He said to them, ‘Why are you afraid? Have you still no faith?’ 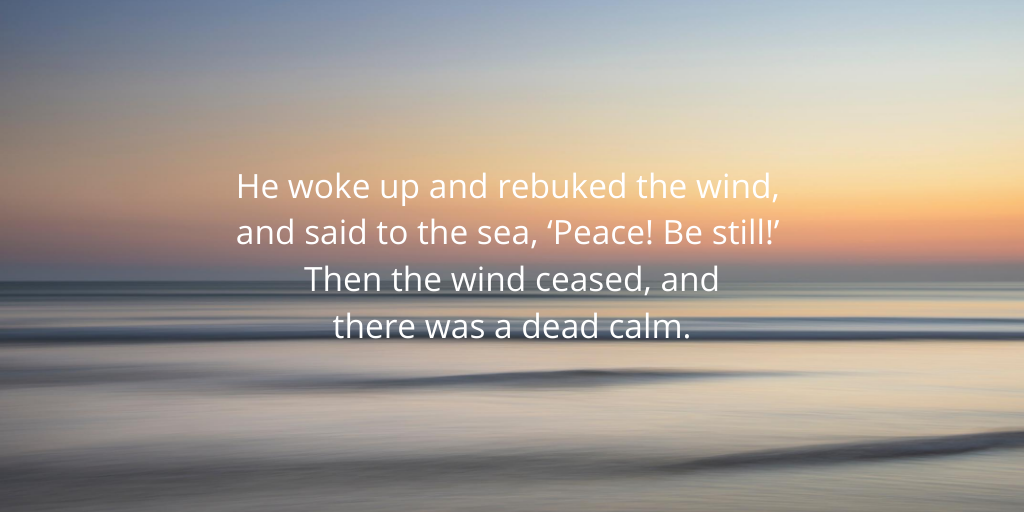 Photo by Jonathan Bean on Unsplash

On the way to Jerusalem Jesus was going through the region between Samaria and Galilee. As he entered a village, ten lepers approached him. Keeping their distance, they called out, saying, ‘Jesus, Master, have mercy on us!’ When he saw them, he said to them, ‘Go and show yourselves to the priests.’ And as they went, they were made clean. Then one of them, when he saw that he was healed, turned back, praising God with a loud voice. He prostrated himself at Jesus’ feet and thanked him. And he was a Samaritan. Then Jesus asked, ‘Were not ten made clean? But the other nine, where are they? Was none of them found to return and give praise to God except this foreigner? Then he said to him, ‘Get up and go on your way; your faith has made you well.’

Sermon by Rev. Robert Gemmell: The Church – a caring community

We sometimes talk within church circles about our identity as a servant people, and I am sure we would all point to the exercising of mission and ministry as vital aspects of our work as a church – being able to identify the actual needs, physical, emotional and spiritual, around us, both within our parish and within our congregation.

It would seem to me that as a church we have a dual task. First of all, to exercise a pastoral ministry to each other within our church family, and secondly, when opportunities present themselves, to exercise a sensitive and caring ministry within the local community.

Think for a moment of our Lord’s ministry and the different elements that we can identify within it. First of all, he spent time preaching and teaching, both to the crowds which gathered around him and to his small dedicated group of disciples. He also exercised a healing ministry to many who presented with various forms of illness and disability. However I would like to focus our attention on another aspect of our Lord’s ministry – his unique ability to be able to understand particular needs of individuals with whom he came into contact and then exercise a sensitive and caring ministry within those situations.

In our suggested readings from Scripture we can identify a couple of situations where our Lord’s caring nature comes to the fore and his intervention brought positive change into the lives of those concerned.

First there was the raw and plaintive cry for help of the disciples, amidst the sudden storm that arose on Lake Galilee on the occasion when they were making a crossing from one side to the other. The frightening cry of men scared for their lives. And Jesus’ response to their cry? He stilled the physical storm and through his action stilled the storm in the minds and hearts of his disciples.

I find our second Gospel reading interesting. Luke recalls the occasion when Jesus was making his way towards Jerusalem and on the border between Samaria and Galilee was confronted by ten men suffering from what at the time was described as leprosy – now referred to as Hansen’s disease. Their pitiful cry was heard by Jesus who responded by telling them to go and let themselves be examined by the priests, as was the custom of the day. Healing came during that journey. Only one returned to thank Jesus and he was described as a Samaritan! Here we are presented with an instance of our Lord’s healing and caring ministry and it being extended beyond the Jewish nation.

These are but two illustrations from many that could be identified from Jesus’ ministry, which demonstrate his caring nature to both his own inner group of disciples and to the wider community.

Let me in turn refer to a couple of instances of churches exercising a caring ministry within their local communities and beyond.

In 1972 we moved from the relative quiet and almost rural setting of the Baptist Church in High Blantyre to what Billy Connolly described as the ‘reservation’, in other words, Drumchapel. Drumchapel is one of Glasgow’s answers to the meeting of the city’s post-war housing needs, a community, at that time, of some 30,000 who were on the whole good, honest working-class folks but living in an area of relative social deprivation. We had one small shopping centre, one bank, one petrol station – very few amenities for a population similar in numbers to the town of Perth.

The Baptist Church was situated up in a corner of the vast housing scheme, the only church in that particular area. In one of the streets, round the corner from the church, it seems that there were more one-parent families than two. And this was a time before nursery education became the right of every three-year-old child.

Within our church there were those who had the foresight, the vision, the desire to become a servant people within the local community. We already had a Boys’ Brigade Company of around 100 and a relatively strong women’s group. We surveyed what we felt were the most pressing needs within our area and sought ways and means of meeting some of those needs, bearing in mind the limited numbers with our congregation. We identified the need for a playgroup, which would be staffed initially by members of the church, but it would be a group which would encourage the parents to become involved in its running. A Girls’ Brigade Company was formed, which quickly rose from nothing to around 60–70 girls. The church doors were opened to men to come in and play table tennis and carpet bowls and to discuss anything from theology to football. The trouble was that it was difficult to get a decent discussion going on football when nearly all present, like myself, were ‘blue noses’ – in other words, Rangers supporters.

Some folks might respond to these examples by questioning what all of it has to do with preaching the gospel. My answer would simply be that it has everything to do with preaching the gospel. Through the playgroup youngsters progressed into the youth organisations. Parents became interested in what the church was offering and I had the opportunity over the years to become involved in the lives, in the ups and downs, of a number of families. As a church we were recognised as a serving community.

For my second illustration we need to turn the clock forward two or three decades, move from the west to the east of Scotland and focus our attention on what has become my home church here in Queensferry. I remember reading The Scotsman’s appreciation of the life of our previous parish minister, John Carrie. That appreciation referred in particular to two significant innovations established by John, both of which have had, and still are having, lasting benefits within the local community and beyond.

The first of these was the establishing of the Forth Bridge Cross, a sponsored fun walk, back and forth across the bridge, raising awareness and funds for the work of Christian Aid. Incredibly, over a million pounds have been raised and money is still being raised – apart from this year – for this worthy cause.

The second significant innovation was more local but equally important: the establishing of the Queensferry Churches Care in the Community, an organisation offering care and respite for many within our local communities. Others were, of course, involved in the establishment of the group, but there is no doubt that John was the driving force behind the organisation which still thrives today.

One wee personal reminiscence – I remember attending a Fairtrade wine and beer tasting evening held in the Priory Church in Queensferry just a few days before John’s death. On that occasion he asked me about my hip replacement and how my eyes were doing after my recent cataract operations. At that time we were only occasional visitors to the parish church and yet he was very much aware of my so-called ailments. An example of a caring ministry extended to the wider community.

The passages from the Gospel and my own personal illustrations and reminiscences are hallmarks of the Christian Church. The precise way in which mission and outreach operates will inevitably vary from place to place. What was right for Drumchapel or Queensferry may not be appropriate for Wardie. What is certain is that every congregation and parish has its needs and we are called as followers of Jesus to ask questions, identify needs, get alongside people in their hurts and be a part of meeting hurts and healing pain. At no time is the challenge to a congregation greater than when they, like you here at Wardie, are about to enter a new chapter in the congregation’s history. Grasp the opportunity to move forward in Christ’s name as a community which speaks his word of love and offers his compassionate caring.

Prayer of thanksgiving and intercession

Thank You, Lord,
for the blessings that you have given us we need to live in this world –
food, shelter, conversation,
family, friendship, warmth, purpose.
Thank You for all who have helped us along life’s journey,
Thank You for giving us a gospel worth sharing with others.
Thank You for the hope of a life which is not snuffed out by death.

(With Thanks to Rev Jock Stein, taken and adapted from ‘Starters for Sunday’ material.)