adapted from Gathering for Worship, a Baptist Union of Great Britain publication.

You trod the way of a pilgrim and ascended the hill of the Lord.

You followed the path of your calling, even though Mount Zion gave way to the hill of Calvary.

You rode into Jerusalem on a donkey, symbol of humility and lowliness, mocking our dream of pomp and glory, demonstrating the foolishness of God before the eyes of the world.

You have shown us the way of humble service, the way of true greatness.

The cries of “Hosanna” soon turn to “Crucify”.

The acclamation of the crowds gave way to fear and contempt.

You have shown us the cost of love and you have called us to follow in your way; pilgrims of the kingdom, living out the foolishness of God and trusting only in your forgiving faithfulness.

Suggested Hymn – Ride on! Ride on in majesty – listen here

After Jesus had said this, he went on ahead, going up to Jerusalem. As he approached Bethphage and Bethany at the hill called the Mount of Olives, he sent two of his disciples, saying to them, “Go to the village ahead of you, and as you enter it, you will find a colt tied there, which no one has ever ridden. Untie it and bring it here. If anyone asks you, ‘Why are you untying it?’ say, ‘The Lord needs it.’” Those who were sent ahead went and found it just as he had told them. As they were untying the colt, its owners asked them, “Why are you untying the colt?” They replied, “The Lord needs it.”

They brought it to Jesus, threw their cloaks on the colt and put Jesus on it. As he went along, people spread their cloaks on the road. When he came near the place where the road goes down the Mount of Olives, the whole crowd of disciples began joyfully to praise God in loud voices for all the miracles they had seen:  “Blessed is the king who comes in the name of the Lord!” “Peace in heaven and glory in the highest!” Some of the Pharisees in the crowd said to Jesus, “Teacher, rebuke your disciples!”  “I tell you,” he replied, “if they keep quiet, the stones will cry out.”

Jesus had been on a three-year journey. It began with a time of testing, followed by a period of calling companions and gathering followers. The foundations laid, his ministry of preaching, teaching, healing and caring, flourished. Within the three years that followed there were times of withdrawal for prayer and reflection, occasions when he led his disciples on spiritual retreat attempting to open their eyes to kingdom work and the part that they would play in the establishing of the early church.

Quite early on in his ministry, however, we read of Jesus “setting his face towards Jerusalem”, a direct reference to future events and an indication that he was aware of the concluding act of the drama.

At Caesarea Philippi the disciples found themselves in a state of shock when confronted with our Lord’s earth-shattering announcement that “the Son of Man must suffer much and be rejected by the elders, the chief priests and teachers of the Law, and will be put to death, but three days later he will rise to life”.

A message that Jesus was to reinforce to his disciples some days later: “we are going up to Jerusalem where the Son of Man will be handed over to the chief priests and the teachers of the Law. They will condemn him and put him to death then hand him over to the Gentiles who will mock him and spit on him, whip him and kill him”.

Palm Sunday marks the climax of the journey as we find Jesus drawing near to the city and into the full glare of national and political debate and conflict.

Irony was to the fore on that first Palm Sunday. On the one hand it was a time of celebration, but it was also a time of foreboding. By now I am sure the disciples were not only aware of the sunshine of the day but of the darkness that would follow.

Palm Sunday presents the church of today with strong crosscurrents of emotion. The joy associated with the hosannas and the coming of the King lie alongside the awareness of the dark events of coming days.

Our Lord entered the city, fully aware of the danger it held for him. Jerusalem did not present a peaceful environment. It was a city with a history of repeated invasion and attack, a city occupied by a mighty imperial power. It was also a city full of rumour, threat, discontent, where the poorest suffered most. In the midst of all of this, there was a strong desire for change and for freedom. For some, that freedom centred around the coming of the Messiah. For others it would be a freedom established only through military force. Jerusalem was also a city where the piety of the religious seemed far removed from the suffering of the people.

Luke’s version of this episode includes some features which are unique to his writing.  Here the disciples are given a more prominent role in proceedings. There are no crowds singing Hosanna. As he approaches the Mount of Olives it is the disciples who praise him for the wonderful deeds of power that they have witnessed.

Luke emphasises the power of Jesus and stresses his kingship. He alone uses the word King. “God bless the king who comes in the name of the Lord. Peace in heaven and glory to God.”

In Luke it is consistently the leaders of Israel who lead and carry out the conspiracy against Jesus.

Palm Sunday sees Jesus challenging various groups and individuals. It was almost as if the Pharisees didn’t know how to respond to this man who refused to debate or argue with them. And the military authorities, who could so easily have put down a violent uprising, seemed to have no strategy to deal with someone who offered no violence and who discouraged his followers from violence.

As the sunshine of Palm Sunday gave way to the darkness and uncertainty of the events of Holy Week and especially Good Friday, think of the stress, anxiety and turmoil that must have entered the minds and hearts of the disciples. For them, after the intimacy of the feet washing, the Last Supper, the period of teaching and encouragement in the Upper Room, came Gethsemane, the arrest and trial of their master. Events that must have brought a deep darkness plunging into their lives, a darkness from which there seemed to be no escape – only despair.

I don’t think it is overstating the case to suggest that we can see some similarities, parallels in our own experience over these past weeks. The ordinariness of life, the sunshine of just a few weeks ago, has suddenly been replaced with a deep darkness descending on our lives, bringing with it uncertainty, anxiety and for some fear and foreboding. For some it’s the loneliness of social isolation. For others it’s the fear of losing their jobs and the financial burden that will be placed on them and their families. For those working at the frontline it’s the continual threat of becoming the next victim of the virus. For all of us, a question mark over what the future holds for us. Dark days indeed.

The pandemic is something that will affect all of our lives in one way or another. This was something that came home to me the other evening when I received a phone call from friends over in Stornoway. Colin and Margaret had been members of Drumchapel Baptist Church when I was minister there back in the 70s. Margaret phoned to tell me that her brother Alex, also a member of the church at that time and now a prison chaplain, had been taken into hospital in the south of England, seriously ill with the virus and on a ventilator. A story that will, no doubt, be repeated over and over again all over the world. Dark days indeed.

For many the light at the end of the tunnel is not yet visible.  I would imagine that is exactly what our Lord’s disciples felt after the events of Good Friday and during the long hours of the following day. But for them resurrection day was just a few hours away. For us it will not be a few hours, perhaps not even a few weeks, but a number of months of continuing darkness and uncertainty before we see the light of a new dawn.

Dark days indeed. But remember the resurrection is a-coming…

Suggested Hymn – Through the love of God our saviour – listen here

Let us bring to the Father our prayers of intercession through Christ who gave Himself for the life of the world. For forgiveness for the many times we have denied Jesus, let us pray to the Lord. Lord, have mercy.

For grace to seek out those habits of sin which mean spiritual death, and by prayer and self-discipline to overcome them, let us pray to the Lord. Lord, have mercy.

For Christian people, that through the suffering of disunity there may grow a rich union in Christ, let us pray to the Lord. Lord, have mercy.

For those who make laws, interpret them, and administer them, that our common life may be ordered in justice and mercy, let us pray to the Lord. Lord, have mercy.

For those in the darkness and agony of isolation, that they may find support and encouragement, let us pray to the Lord. Lord, have mercy.

For those who, weighed down with hardship, failure, or sorrow, feel that God is far from them, let us pray to the Lord. Lord, have mercy.

Holy God, holy and strong, holy and immortal, have mercy upon us. Amen 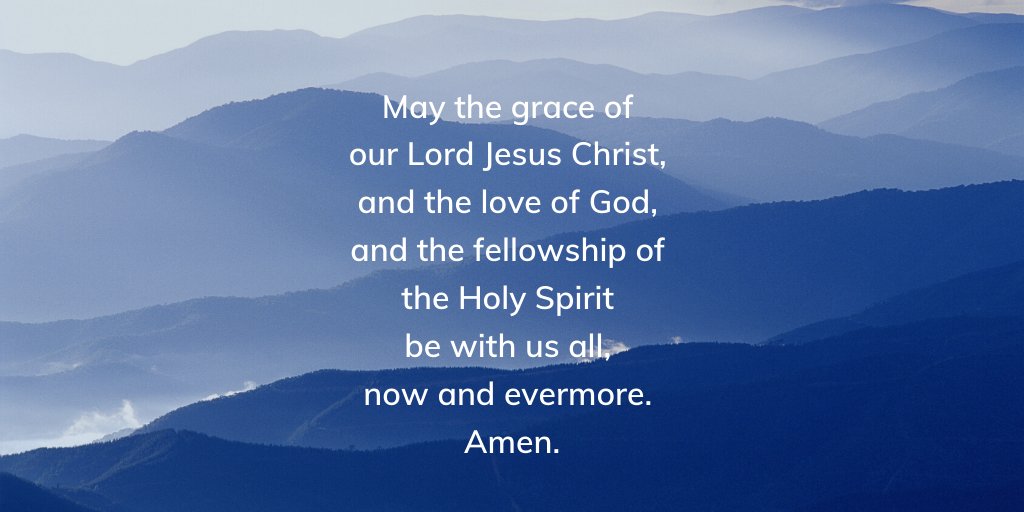